Hi, we played a little battle between a small force of Night Watchmen against a medium raiding Free Folk force..

You can see here both armies: The "crows" are commanded by Allson Torne commanding1 unit of enhanced veterans (top left), then 2 units of sworn brothers, with Jon Snow in the second one, and 1 unit of crossbowmen.
Jon's Wolf, Ghost, was sent to left sode ton support ser allister in a potential flanking countersattack

Non combat units were Maester Aemon and expert Blacksmith Donal Noye.
Melee units will keep resistance the best they could, and crossbowmen would be kept in second line as mobile reaction force. 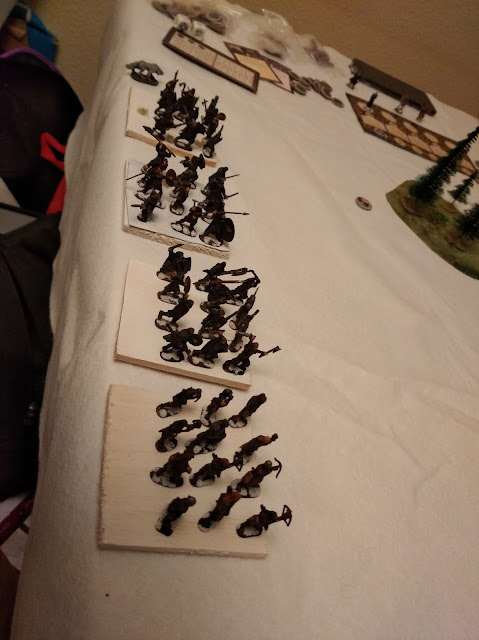 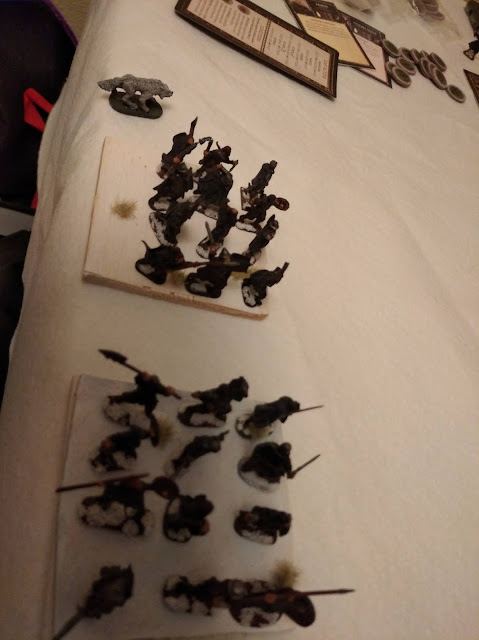 Wildling force were split on 2 groups: first 2 unit of freefolk raiders, then 1 unit of  elite thenn warriors with Thormund Giantbane  and 1 Giant. All bet on melee punch 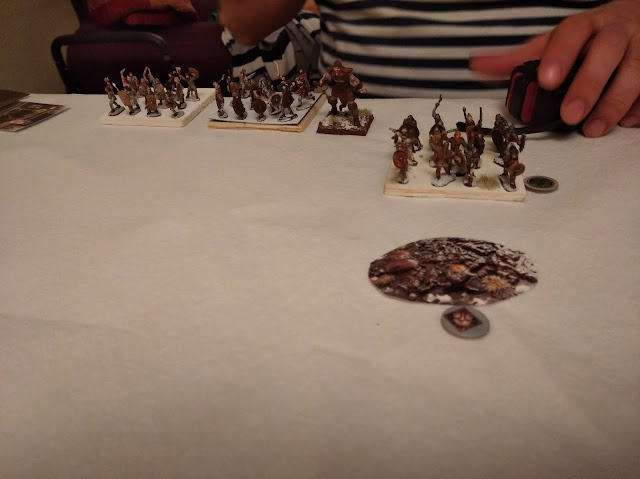 The second group had also a giant and a wild unit of Cave dwellers.
Supposed to be a flanking force 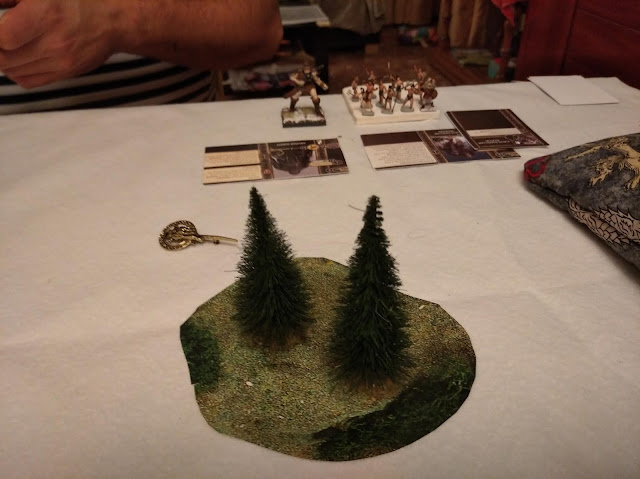 The wildlings advanced fast.... The crossbowmen  were  able to maneuver and keep a good bolt arrow on some enemy units inlcuding one giant (that in wildling flank zone). 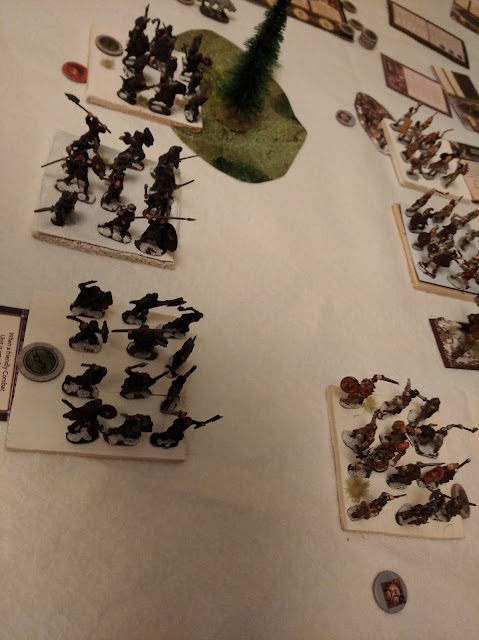 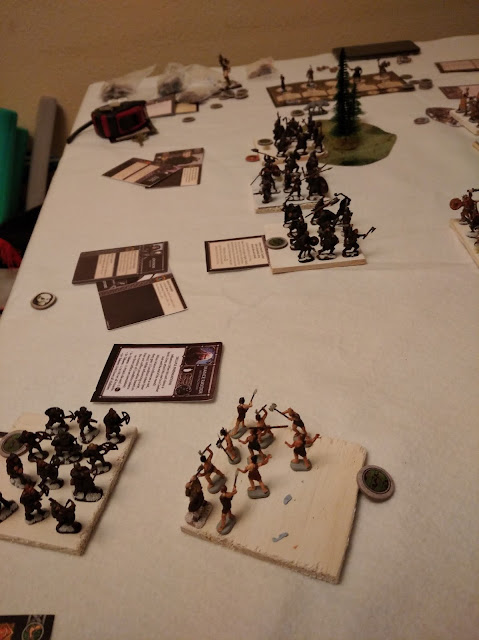 We missed to do some pics of the first and heaviest encounters, in the centre which were actually critical...  The wounded giant (Watch right side) tried to attack in the brothers unt  in centre, where Jon Snow Was, but failed (after inlficting many casualties), Watch was lucky and one giant was killed! First trouble for the wildlings (we had some polemics about how wound were dealt and recieved by giants...) 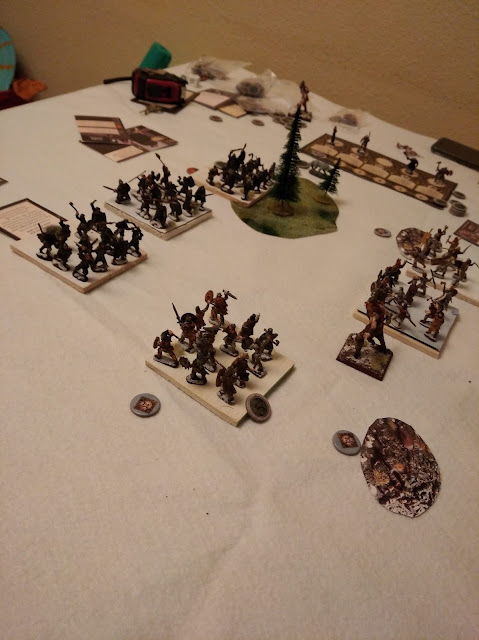 The second giant in turn took some profit and was able to attack  again on the weakened Jon´s unit.. All killed, even Jon (lets say better he was just seriuosly woundedn and lyying on the filed for narrative reasons :))! problems started also for the Watch


In the meanwhile, Thenn warriors with Thormund crashed against the second brother unit... Fight was a draw, but then victorious giant then attacked them from the rear!!!.. Crow unit was  almost killed, but they performed good, and they survived...Specially thanks to a polemic card which allowed all damage from giant to be blocked., twice..
Many wounds were recovered thanks also to Aemon healing powers and the watchmen could attack the second giant and kill in turn!! Winds of victory started to change again.. (but only after again same polemics about giants attacks and how to be dfended....) 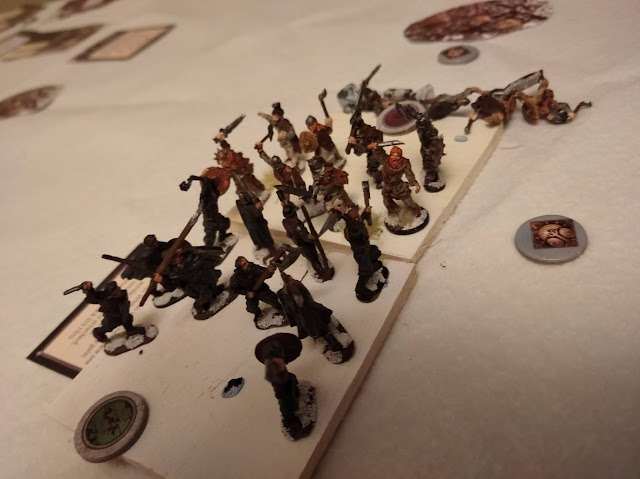 On the Wtach right flank, The cave dwellers advanced fast,  but crossbowmen mocved to get in the middle of their way and shoot again...The cave dwellers,after taking several casualties from crossbow bolts, tried to charge the crossbowmen..  But The crossbow brothers then made a succesfuly bolt counter-volley against them... and Even worse for the wildlings, the charge failed.. Many casuaties taken for nothing.. 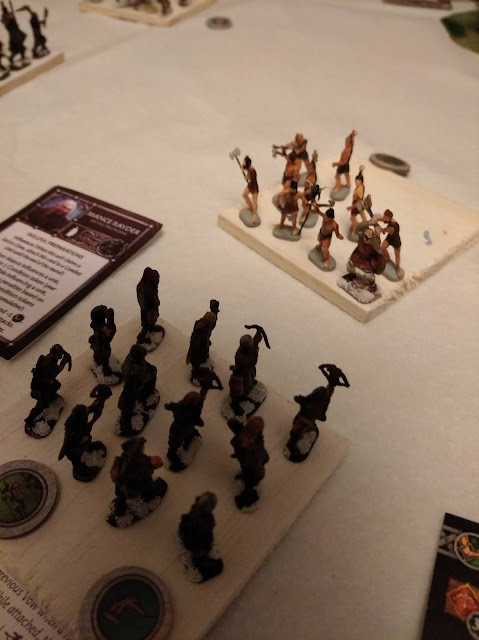 The Watch left flank was an easy business for The watch veterans under Ser Allister command and the Vengeful Wolf, Ghost.. The wolf alone could defeat a whole raider unit which were panicked of the white beast, and then attack together on the second raider unit. 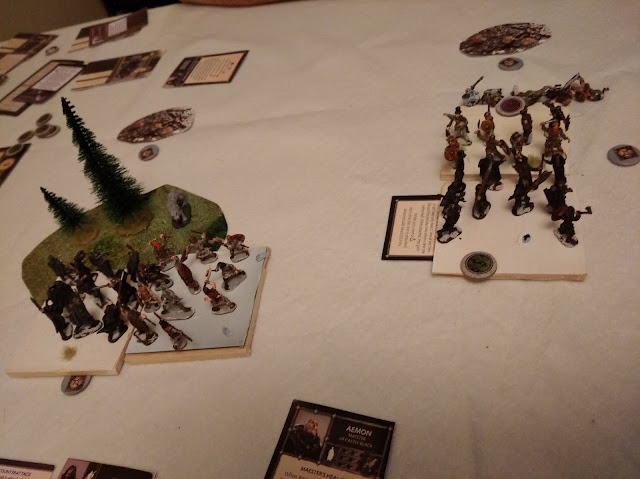 Veterans and Ghost  destroyed easily the second raider units in the Wtach left flank,  They would have been howerver more useful omewhere else! 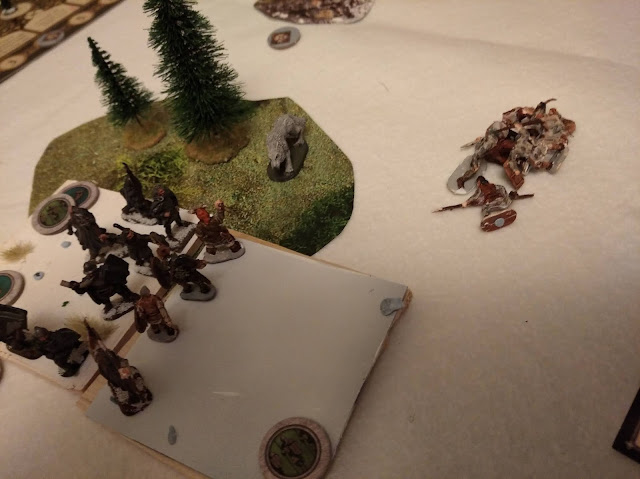 Most critical point for the second Watch brothers unit.. Almost destroyed after the Giants charge (even if the giant was killed) and then charged by Thormnd...
However the healing powers of MAestar Aemon and some lucky cards kept them alive... They could counter the wildling last effort. 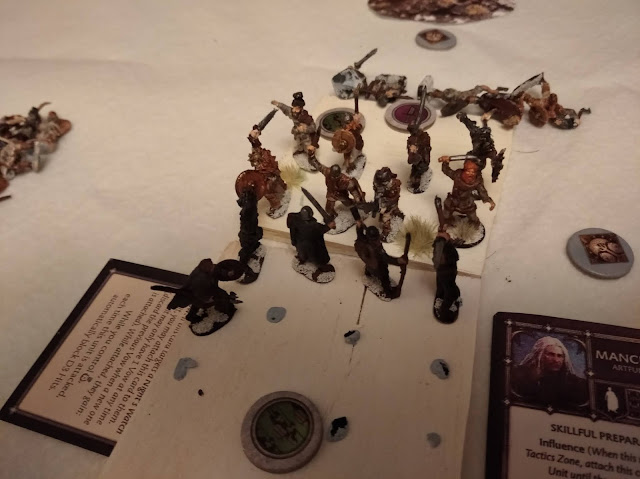 End result on right flank of the crows.. Altough they finnaly got charged,The lucky crossbowmen stood and finished all cave dvellers, as the had superior numbers.. Victory for the Watch but with some polemics.. (we realized leater, we dealt too many wound from giants in natural situation, becausee we misread the rules,  but also the blocking crads whci were used against it wer enot legal..)

So we can say It was some kind of pplemic. cheating draw battle... War beyond the wall is usually dirty stuff , with no rules, and never decisive battles are fought.. However, indeed the hardest men perfomed good as desired form both players 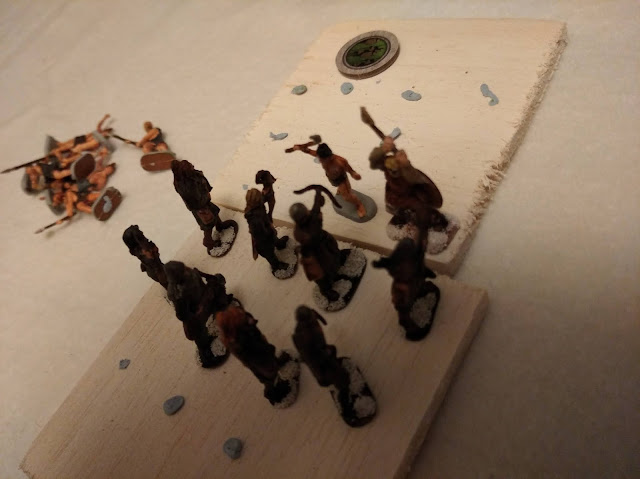