"Senior tribune Marcus Cuniatus was looking to the plain in front of him...

It was a known place for him and his men, here in the middle of Britannia... The roman autorities used to have a good relationship with the local tribes, but now, just after  the Iceni rebellion started, every native was a suspect, and the roman troops had commited some big abuses on the civil population, even if allied like it was the case.. Tension had grown and the locals had also joined the rebellion

The tribune had previously developed a very close relationship with the local prince, Tripates. they used to meet together and even their chidlren had played together..  Now he was in the opposite side of the field, commanding the briton warriors- It is really a pity.. he is somehing similar to a brother to me.. thought the roman offcer . If only things were different.."

This plain was known as "Locus Gnotus" that means " Familiar place" , as near the main village, the native used this plain and his hill to take rest and amusement, often joined by the romans which were not in service,  but today it would be different.. friends became fierce enemies.


"The junior tribune Aldaius , second in command,ordered to the optio in command of a legionary scorpio emplacements: move that weapons forward, I will need more supprt"
"No, -answered Cuniatus,- there they are fine" The barbarians will run to us soon... You will advance with the cavalry and the auxilieres to the hill to get some advantage there. Then shouted to centurios commandingh the infantry in the main force:- Let them advance! Then, at my signal, Fire and Rage" Fight for Rome!


At that very moment, prince Tripates gave the order to his men to advance . He was not happy, living near the occuppers was not so bad at all, but they made horrible things recently. He was sorry for Cuniatus, but he had to defend his peple. he send a signal to his seocn chief in command Carnutas in the left flank to advance to the hill, and the shouted to his own force: Warriors, forwad by Lugh!!"


I had really a funny weekend of wargaming,

This is a very compact and nice  ruleset, even if extense, and it permits getting ig armies of a lot of figures with a very impressive look of the field,  wich an be used as single units or divisions with more or less easy movement-commands-attack-moral-destruction instructions (although you needti read them more than ince and practice, as we did) One funny thing is that you need t activate every unit by giving them direct and clear orders frm the commanders... AS in real world orders can fail and usually warriors dont move right

Rules are at some point open, but with a friendly player you can solve it easily and with common sense form both sides  (so, very good for battling friends but probably not so suitable for tournaments..) Anyway that is exactly what I like.... 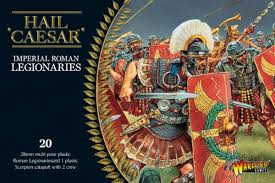 The problem actually was that I have actually (and unforntunately)  not so many models paintedn and ready for historical battles, so I had to search in my old "archives..." again as in some previous ocassion

I was able to make a good force of around 100  romans and 180 celts/britons , getting my old bad painted figs from airfix and revell, and taking also some used and bad painted figs that another cousin lent me (so it was all a familar issue as the name of ther battle :))

This is how both armies looked, after mounting a good playing table on my brother-in-law living room and taking some lego-parts from my nieces to represent the wood areas 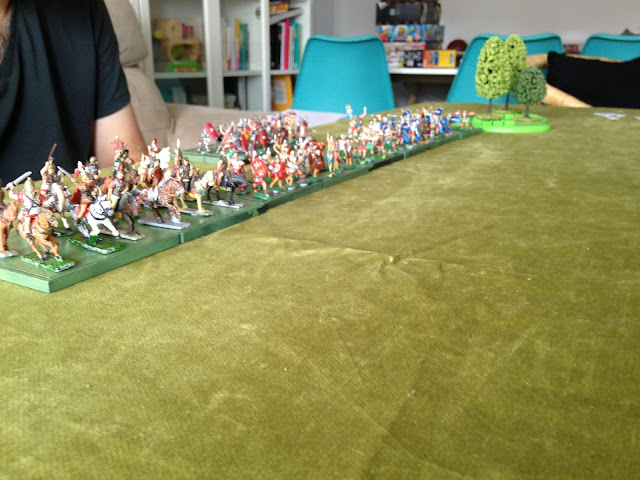 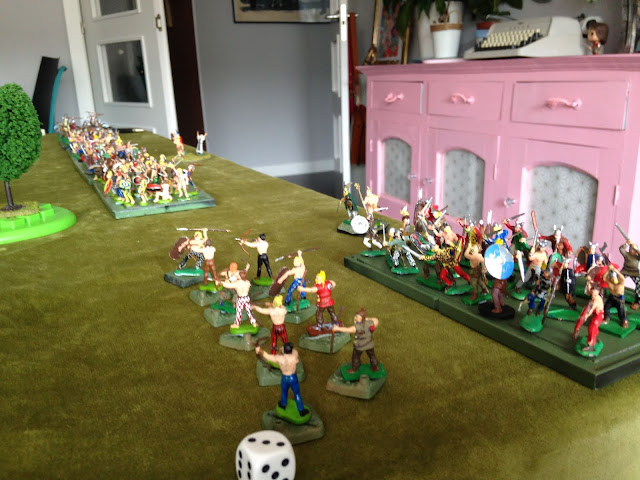 The start of the battle 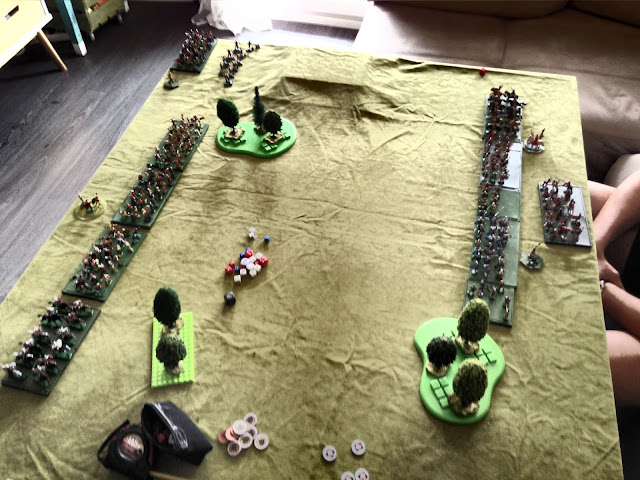 Firtly there was enthusiastic celtic advance in the left (secondary division) 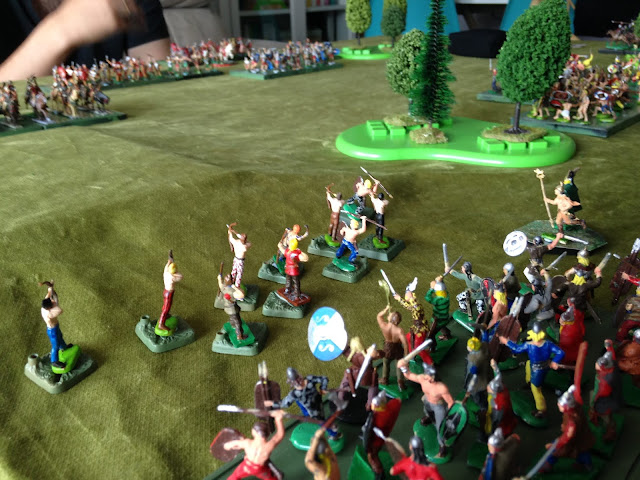 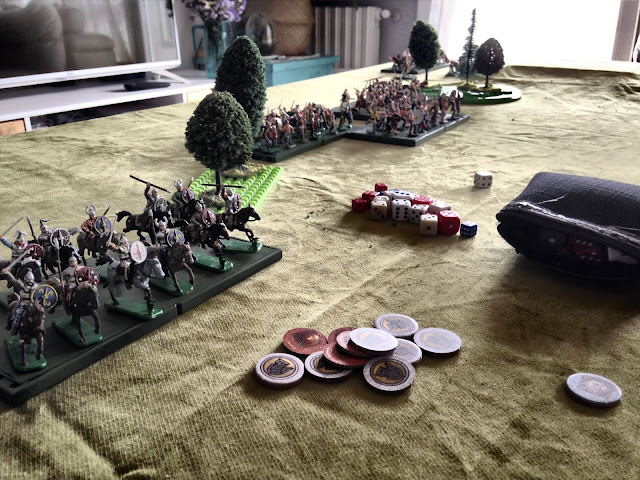 Romans preferred to wait and save energies, fring some  missile (with no much success..)

Only the Secondary division (auxiliary cavalry and auxiliary infantrymen) advanced on their right to take control of the hill, not so fast but steadily enough 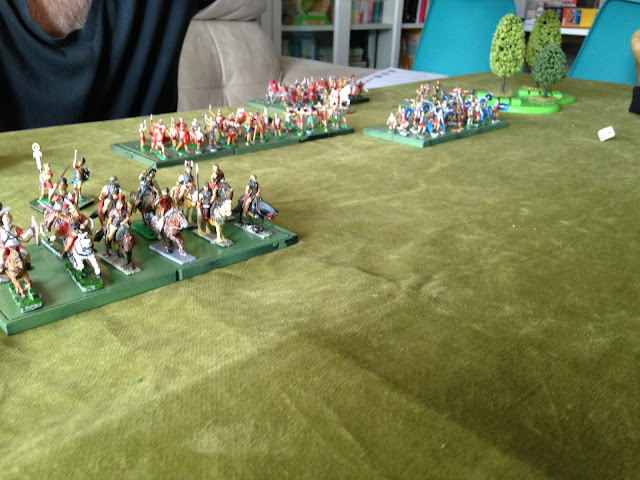 The major celtic central division kept advancing very slow (dice for orders were quite bad) ... Maybe too much warm bier the night before the battle? Romans easily waited and shot several arrow and bolt volleys.. Some casualties started to be inflicted on the celts 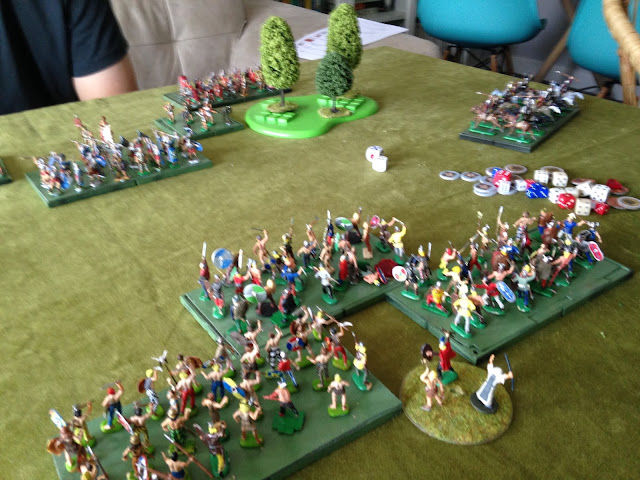 The initial briton advance on the left became also slow when fot two turns the celts did not advance at all . Roman cavalry were faster but also stoped once on the top! Gallic skirmishers coudl also shoot some succesful arrows on them! 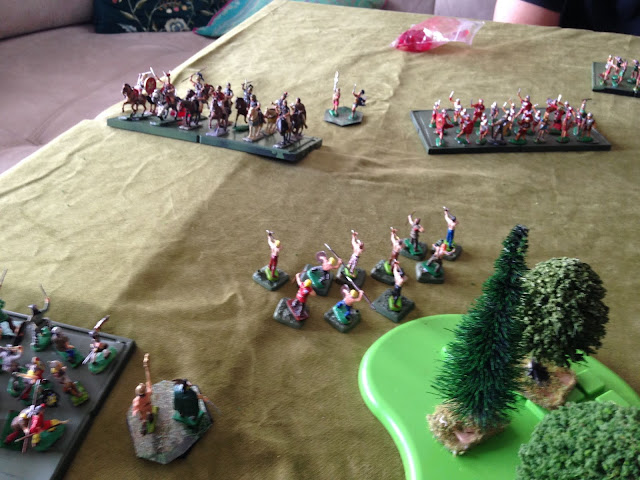 Following Carnutas order, The warband 1 tried to reach the roman cavalry but they couldn´t  ...In response Aldaius, the young tribune in command of the division joined the unit to use a FOLLOW ME order and so bravely led,  the cavalrymen charged and made several caslties on the barbarian warriors! But the britons attacked in turn and made also several wound on the romans...
Both commanders got involved trying to get the best of their troops and adding more attack dice to the fight... Fortune was in briton side and the roman riders were disbanded... Tribune Aldaius survived but was taken prisoner.. 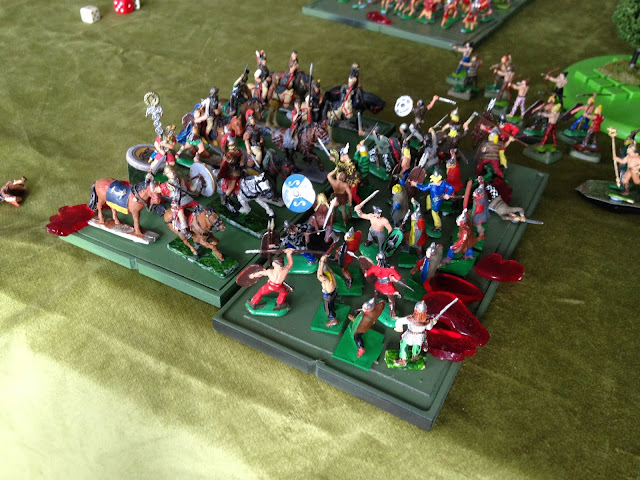 In the center the Legionary cohort II took suddenly initiative in the slow briton advance, as charged and broke the central celtic warband in one single stroke, with roman martial efficiency helped by their Pila and gladii..  Only 2 roman casualties taken in account of crushing the main celtic attack..

The auxiliry cohort who was supposed to support their cavalry comrades, could however not stand the chance of charging another celtic warband into the flank after getting encouraged by the previous legionary success .. However these celts were fresh and casualties by both sides.. Auxiliaries lost the combat and had to fall back... 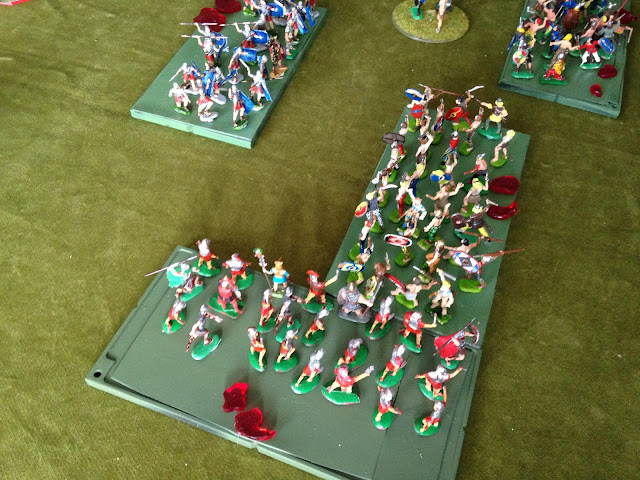 Celts had received a hard punch on the very center of this line...  Prince Tripates made all infantry units of the major division to go back and recover a bit..
The noble celtic cavalrymen however advanced on their own trying to expoit the exposed roman left flank! They had to change to open order to get into the woods trying to surprise the romans in a wild charge! 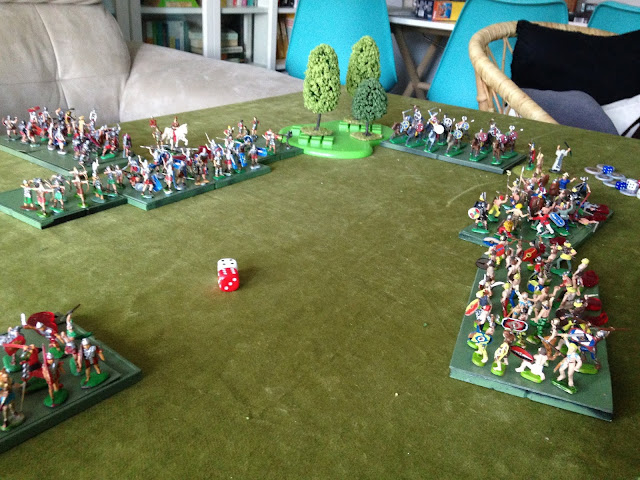 This surprise attack from the woods was a little disordered, and at the beginning was a succes against poor unarmed scopios crew on their flank (totally killed and destroyed in one single charge), the celtic nobles still went forward to hit on the Leginary century II, hoping to have also an easy victory..
However their open order was a disadvantge against the formed romans, and the infantry just two casualties agianst one..
In turn, the romans counterstroke with also help formt he remianing Cohort II which entered in fight for the firts time, tooking the celts riders  in their right flank. A new strong rain of Pila fell on the britons

It was a carnage, and the cavalry was totallty destroyed 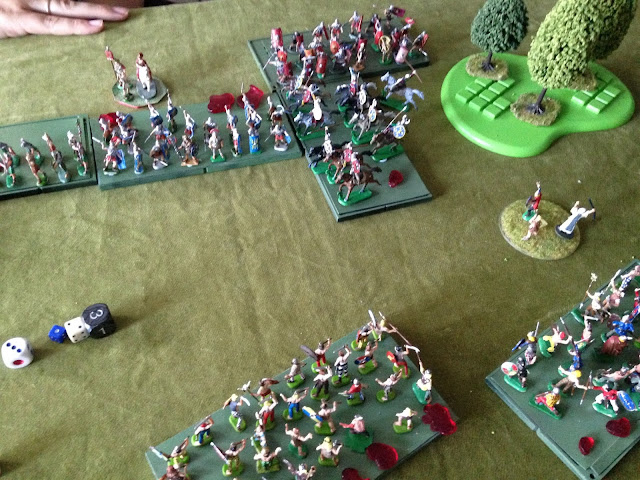 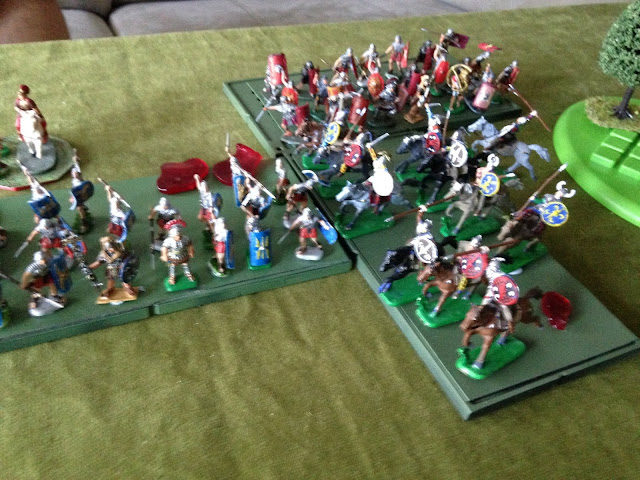 Both armies were quite exhausted after these previous violent engagements .. No side seemed to prevail


The britons made a soft movement forward just trying to harrash some romans with arrows and javelins and not risking again a frontal impact... Auxiliaries were already shaken after retiring and taking more caalties 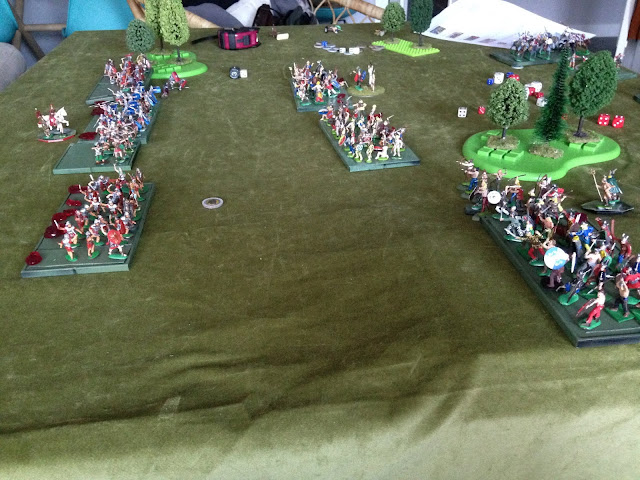 Romans just kept their position. The auxiliaries on the right who were already "shaken"  had more acasusalties and had to maske a break tests.. They failed and the unit fled!

So the roman general saw his right quite weakaned and decided to retreat in good order to their camp.. Britons were prudent and not move towards the enemy.. The day was over, field remained in briton hands and one roman commander had been taken prisoner, but it was not a decisive victory at all..
The legionary units were still quite operative as well as their general and their archer support.. They could stand long waiting for reinforcements from imperial Governor

Peace in the region  was still far away... 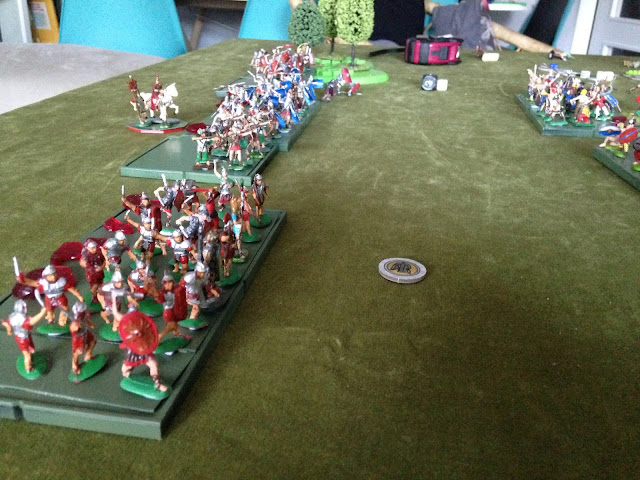 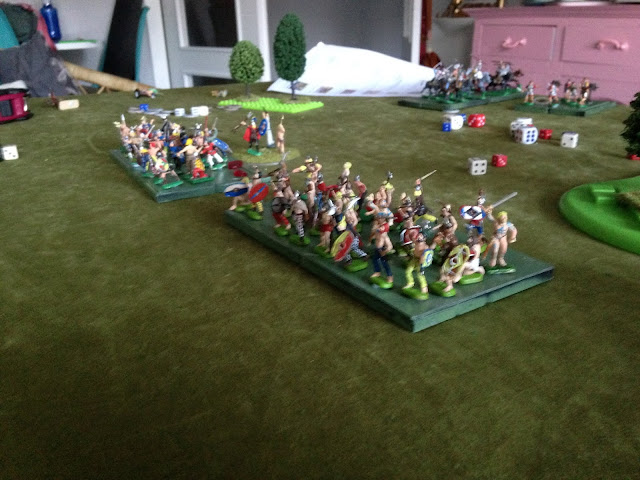 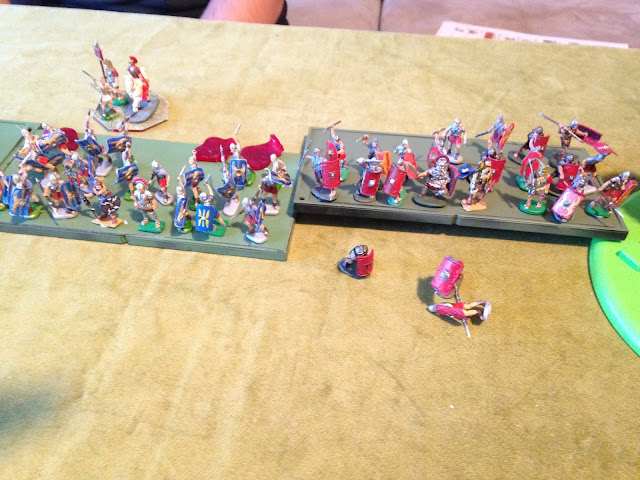